A wedding proposal that we will remember forever. This is the story of George and Olivia, by our groom himself:
“We arrived in Santorini by SeaJet and Phosart was at the port with the entire team of 5 ready to capture our arrival. Chris, who we had been meeting with on Skype for months, was holding a sign with my name on it and he was playing the role of our taxi driver....”
While driving to our hotel, we were being filmed by a hidden camera in the car, a drone video camera in the sky and by the rest of the crew who were hidden at stops along the way.
This helped capture all of our joy and excitement of being in Santorini together.

The photographers gave me a specific route to take in order for them to be strategically placed among the tourists and capture all of our special moments together without being noticed. They were very well blended in among the tourists and even switched hats throughout the day to disguise themselves. Olivia had no clue that they were even there, they were amazing! (Read more below...and don't miss their amazing video here!)
View the embedded image gallery online at:
https://photographergreece.com/component/k2/865-breathtaking-wedding-proposal-at-santorini-gem#sigProIde14f67b560
When we got dressed up and I saw Olivia in her dress, my stomach filled with butterflies; the fact that I was about to propose to my best friend started to sink in.
Upon arrival, we had the manager of the restaurant waiting for us at the entrance and she asked if we had a reservation, I gave her my name and she said “Yes, I see it here, but your table is not ready”. We told her to say that beforehand, so I could reply “Okay, no problem. Can I use your bathroom?” Instead of going to the bathroom, I walked over to his position in the heart shaped candles which we had the decorator set up. Once I was in position, we had the Studio Phosart team clip a microphone on me to capture all of the audio of the proposal. When everything was set, the manager told Olivia and her father that their table was ready. Before they began to walk to the table, her father took out the blind fold that we gave him and said to Olivia “George has a surprise for you and I need to blindfold you.” At that point, we didn’t care if she had any suspicions. We did not want her to see any of the décor just yet, we wanted the first thing she saw when she took off her blindfold to be me, ready to propose. Once the blindfold was on, another member of the photography team put a microphone on Olivia's father to capture all of the audio of them walking towards the spot where I would be proposing.

I got down on one knee, and asked her to marry me. When she said yes, my heart jumped and I was the happiest man in the world."

Venue: Santorini Gem | George is the owner of Bold Productions
This wedding proposal was featured on HowHeAsked! 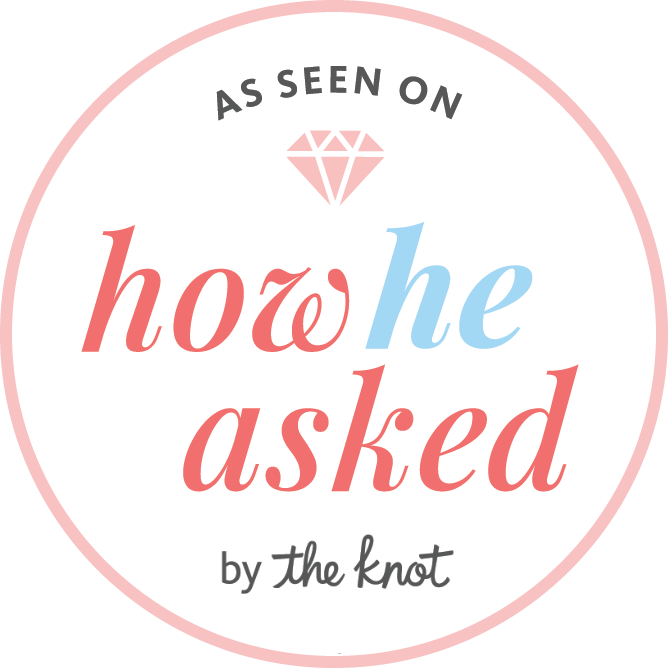